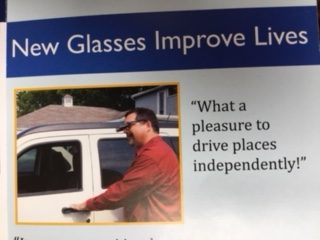 When I was young I never dreamt that I would be able to drive a car. Without glasses, my vision was maybe 20/200 ( I could see the big E) 20/100 with glasses.  I had older cousins with the same eye problem and they couldn’t drive either.

Then one day my mom received a phone call from one of her cousins and said her son went to Philadelphia to the Feinbloom Center and bought some revolutionary glasses called “bioptics” that enabled him to see nearly 20/20 and NY had just passed legislation allowing them to be used while driving. It was 1978 so I was 16 at the time and had never considered the possibility of having a drivers license. My cousin Chris is the same age as me so we decided to make the trip to Philly and see what they could do for us. The people were great. They did all the normal eye exams and tests, but all we wanted to do was try out these bioptic lenses.

I clearly remember looking thru these lenses for the first time. We were amazed at how much the rest of you could see. Both our moms raised us to think we could do anything, “just had to look a little harder than most”. I’m thankful for that. My younger brother has the same eye condition and we often talk about how we were not allowed to feel sorry for ourselves. Well, I’ll tell you that day I almost did. It never occurred to me that we were missing so much.

Part of our eye condition is we are also color blind (Red deficient). They also had us try a slew of red lenses made by Corning. So we also saw what red, orange and pink really look like for the first time. It was a great day. I brought home my new glasses and started doing some training on how to use them while driving. I also sat in the back of the class for the first time in my life and could actually see the chalkboard.

I did learn how to drive and got my driver’s license shortly before my 18th birthday. Flash forward about 16 years and I broke one of my telescopes. That same cousin Chris had seen an article in the Rochester paper about an eye doctor having a low vision practice in our area. I called and made an appointment to meet with Dr. Kornfeld. I met with Dr. Kornfeld and he gave me the normal eye exam including testing my vision and asked me a question that I had not been asked before. “Has any previous eye doctor you ever tried fitting you with contacts?’ I told him no and he went on to explain that often your vision can be improved with contact lenses. Would I be willing to give them a try? I responded that I “would put bricks in my eyes if I could see better”.

Dr. Kornfeld promptly did some more tests and fitted me for contacts. When my contacts arrived I went back to his office and we put them in my eyes. My vision improved from 20/100 with glasses to 20/70 with contacts. That might not sound like much to most people. In fact, I’ve told folks that if all of a sudden you woke up with 20/70 vision, you would think you have gone blind. For me, it was a huge improvement. Since my Telescopes needed to be sent in for repair anyway, Dr. Kornfeld suggested we remove my prescription from the telescopes so I could wear them with my new contacts. It was another great day.

On a side note: My brother, my nephew and my cousins' son all have contacts now and their corrected vision was also improved by at least 30% when compared to glasses. I do a bit of driving for my job and I am forever grateful that I broke my telescope and had to go visit Dr. Kornfeld.

For A Free Consultation With Our Low Vision Doctor 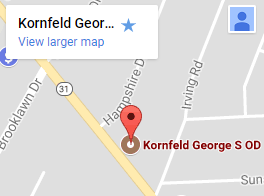